Key Message: Atmospheric deposition, both direct and indirect, is a major source of nitrogen to water and land in Sarasota County. Additional monitoring stations along an urban-to-rural transect, including coastal areas, would significantly enhance understanding of atmospheric nitrogen loading to priority water bodies.

Quantifying the absolute and relative contributions of nitrogen loading from atmospheric deposition is essential for a nutrient budget and management strategy. Multiple monitoring stations are needed within urban areas and along an urban-to-rural transect to accurately characterize the variability of emissions and deposition.

The National Atmospheric Deposition Program (NADP) is a cooperative effort between federal, tribal, state, and local government agencies, educational institutions, private sector, and non-governmental agencies. The NADP National Trends Network publishes annual maps of total (wet + dry) N atmospheric deposition for the United States. From 2002-2017, total nitrogen, oxidized nitrogen and nitrate dropped across the United States in response to United States Environmental Protection Agency (EPA) regulatory and market-based cap and trade programs (Figure 5.1.1). Equal or greater reductions have also occurred for sulfur dioxide emissions. Meanwhile, wet deposition of ammonium nitrogen, not specifically targeted by EPA regulations, has generally increased since 1989. Maps generally show an overall decrease in N load for the Sarasota region during this period as well. In any given year, maps show N loads in the eastern rural area of Sarasota County about 40% lower than N loads than in the western urban area. 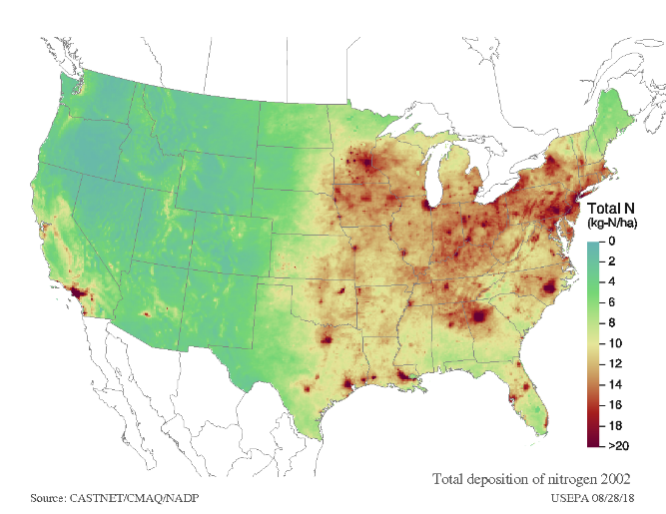 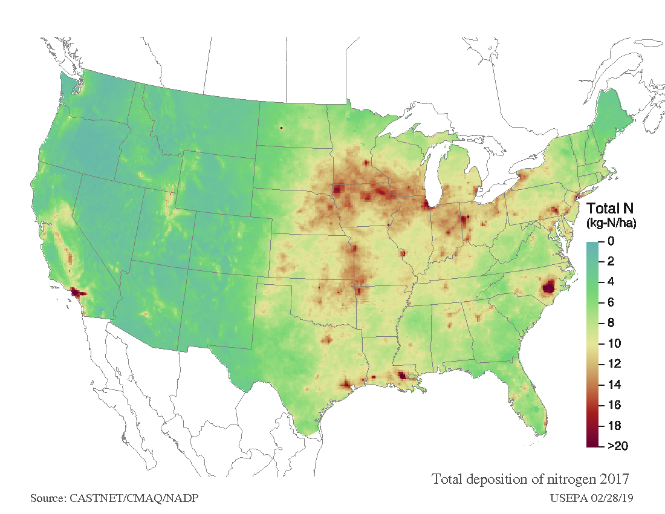 The NADP network includes one station located in northeast Sarasota County at the Verna Wellfield. Records of total nitrogen, nitrate, and ammonium concentrations, equivalents, and deposition have been maintained since 1983. Recent trends show declining atmospheric nitrate concentrations but increasing deposition rates (Figures 5.1.2). Because of its remote location, the Verna Wellfield station may not be ideally suited for measuring atmospheric deposition on coastal waters, or atmospheric deposition from traffic congestion in more urbanized areas of the county. 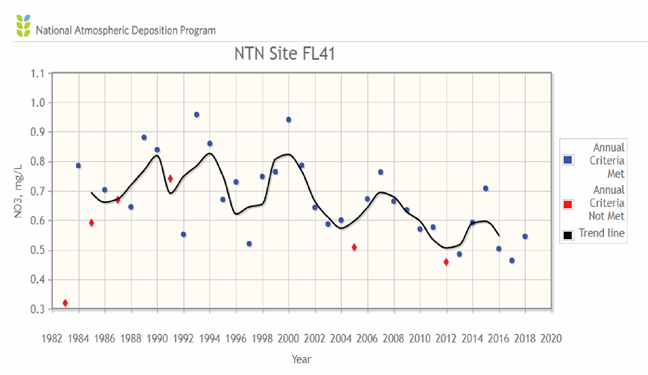 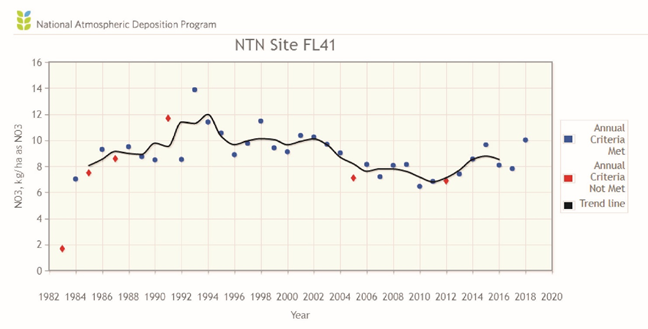 NADP suggests that annual wet deposition maps underestimate rates of deposition in urban areas, since only 7% (19 of the 261) of the monitoring sites are classified as urban (Walker and Beachly, 2019). NADP recognizes that multiple monitoring stations are required within urban areas to accurately characterize the variability of emissions and deposition in these ecosystems and in urban-rural gradients. Sarasota County has only one air quality monitoring station measuring nitrogen deposition and it is located in the remote northeast corner. Additional monitoring stations along a rural-to-urban transect, including stations in coastal areas, are required to better understand and measure atmospheric nitrogen deposition in priority water bodies. Monitoring at the Verna Wellfield station should be expanded to collect dry as well as wet deposition data. In addition, EPA’s Watershed Deposition Tool (WDT) should be employed to incorporate transect data for the Sarasota County region similar to that undertaken for Tampa Bay. This later effort should consider variable land-to-water transfer rates as a function of land use/impervious coverage.

Three approaches to estimating nitrogen loading are presented and compared here. Atmospheric deposition of nitrogen to Tampa Bay and its watershed from 2002-2006 was estimated using the EPA’s WDT, a user-friendly interface for extracting and analyzing model output data (Poor et al., 2013a). This effort incorporated atmospheric deposition data from the Verna Wellfield monitoring site in Sarasota County, the only NADP station in the region. From 2002-2006, the area-weighted average direct and indirect unit N loads to Tampa Bay were 9.3 kg/ha (8.3 lb/ac) and 12.02 kg/ha (10.7 lb/ac, respectively. Average indirect (land-to-water) deposition was 2.18 kg/ha (1.9 lb/ac).

Analysis showed the largest source of error in estimating deposition came from uncertainty in the N export coefficient, the rate at which N is transferred from watershed to bay and set to 18% for the entire Tampa Bay watershed (Poor et al., 2013b). Consideration of variable transfer rates as a function of land use/impervious coverage would be a reasonable next step.

Using a concentration-based method, the South Florida Water Management District (SFWMD) utilized average nitrogen and phosphorus concentrations of 0.54 mg/L and 0.0159 mg/L to estimate atmospheric deposition for the Lake Okeechobee Watershed (SFWMD, 2010). Atmospheric deposition was computed as the product of these nutrient concentrations and annual precipitation, seeming to represent only wet deposition. Using these nutrient concentrations for Sarasota County area and average annual rainfall of approximately 54 inches results in a unit nitrogen deposition load of 7.3 kg/ha (6.5 pounds per acre) and a unit phosphorus deposition load of 0.21 kg/ha (0.19 pounds per acre), somewhat lower than the WDT estimates that include both wet and dry deposition.

Finally, a third method is presented here using existing estimates to calculate the direct and indirect N deposition load to Sarasota Bay accounting for land use. Direct over water deposition rates were taken from 2006 Tampa Bay estimates (Poor et al., 2013a). Direct (gross) over land deposition rates were taken from 2017 NAPD maps of rural, suburban, and urban areas of Sarasota County, then converted to indirect (net) rates using the typical 18% land-to-water transfer rate (Table 5.1.1). The rates were applied to the 2017 Land Use/Cover information for the Sarasota County area and for the Whitaker Bayou watershed.

For the Sarasota County region, total gross and net indirect nitrogen deposition loads were estimated at 2,261,967 pounds and 415,984 pounds, respectively. For comparison, the approximation method utilized by the SFWMD for the Lake Okeechobee Watershed (SFWMD, 2010) yielded a gross indirect nitrogen deposition load of 2,463,293 pounds when applied to the Sarasota County region and using an average annual precipitation of 54 inches.

For the Whitaker Bayou watershed, total gross and net indirect nitrogen deposition loads were estimated at 24,434 pounds and 4,626 pounds, respectively. For comparison, the approximation procedure utilized by the SFWMD for the Lake Okeechobee Watershed (SFWMD, 2010) yielded a gross indirect nitrogen deposition load of 22,910 pounds when applied to Sarasota County and using an average annual precipitation of 54 inches.

5.2 Educate the public about the link between air and water quality and choices to reduce nitrogen oxide emissions